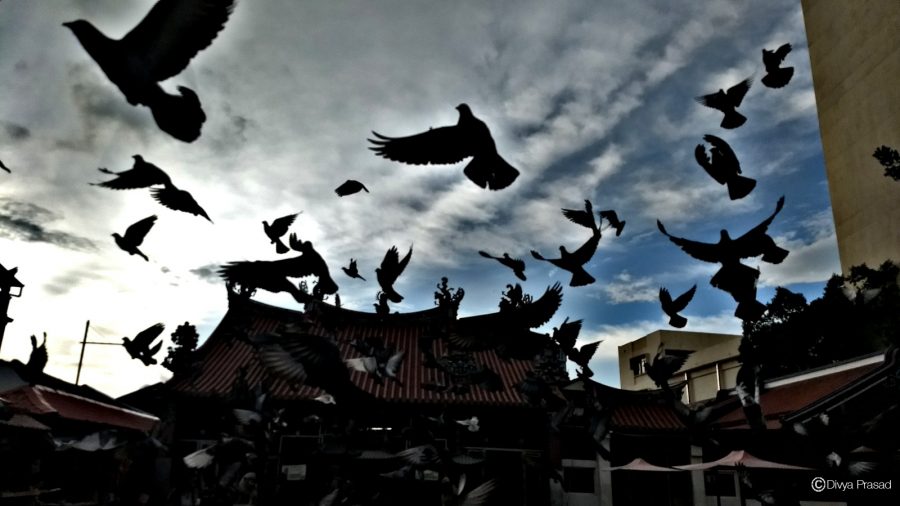 The island state of Penang is a magical mixed bag offering you everything from a laid-back beach break to a cultural indulgence. Its capital George Town – a UNESCO World Heritage city is home to the legendary Quan Yin Teng – also known as ‘the Goddess of Mercy’ temple. Standing beautifully in the heart of the city on the ‘street of Harmony’, this ancient temple was built in the 18th century by early Chinese and Cantonese settlers in George Town. Back then, known as Kong Hock Keong, this temple honours the Buddhist Goddess Quan Yin – the feminine form of Avalokiteshwara. She is revered across Asian cultures as the patroness of the sea, the guardian of seafarers and fishermen, the protector of the human world – the one who bestows peace and compassion upon all. Originally, this temple was constructed as a dedication to Saint Ma Chor Po – a deity of the seafarers and an incarnation of Goddess Quan Yin herself. 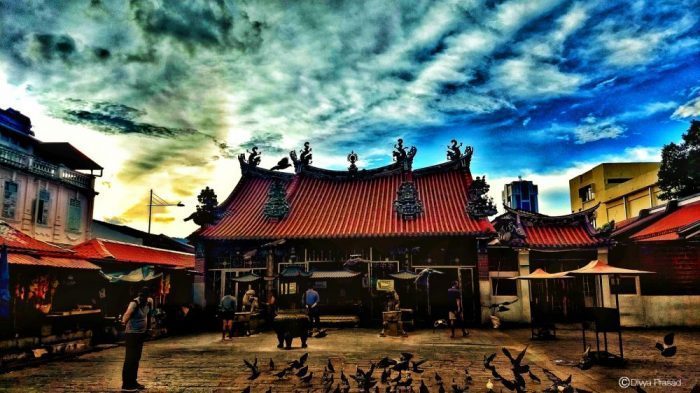 Upon arriving here, a blissful whiff of Sandalwood joss sticks in the air and fluttering pigeons invite you into this Taoist architectural wonder built in accordance with the principles of Feng Shui.  Wisps of smoke rising from the intricately crafted joss sticks added to its mystical aura. Next to it, was a huge pot for burning paper money offerings to the Goddess for luck, good health and prosperity. An old tree with deities by a dried-up well stands tall in the temple complex.  Sculptures of Lion guard the entrance of the temple washed in the oldness. The colourful dragons sit on the roof in all four directions and entwine the aged pillars of Goddess Quan Yin’s shrine. I was enchanted upon stepping into this magical world of mystical dragons, prayer flags and Buddhas adorning this divine temple. Further inside, Goddess Quan Yin sits in the centre, opening her eighteen hands to bless her devotees with peace and contentment. 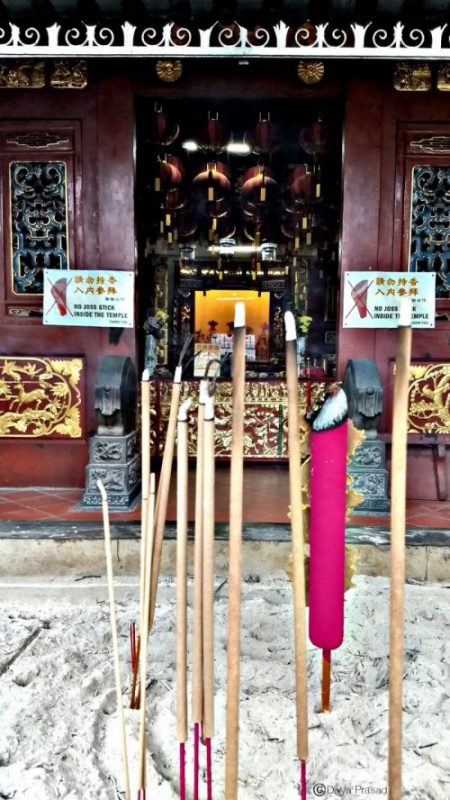 Legend has it that, Goddess Quan Yin attained a state of Nirvana but chose to remain on earth to lend her guidance to the world. She postponed her Buddhahood by staying on earth to nurture, guard and protect the human world.  Millions of devotees flock every year to seek the blessings of this powerful goddess. Several factual legends live in the crevices of this temple. During the World War II, the Quan Yin temple was totally unaffected by the Japanese bombings. It is said that although the bombs were planted to destroy the temple, it exploded in the courtyard sparing the shrine.  Many distressed souls found refuge under this temple during the World War II. Not an inch of this temple was shaken, which itself feels like Quan Yin’s divine intervention and remains a mystery to date.

The temple was built as per the principles of Feng Shui. Rooted in ancient traditions, it is regarded as a gateway to Nirvana in the material world.  The basic principles of Qi – energy, the Yin and Yang – feminine and masculine, the five elements – earth, fire, water, wood and air along with two cylindrical installations, and the eight directions; have been essentially incorporated into the shrine’s architecture. The temple stands in a commanding position, with its eye watching over the sea all the way up to the hills of Wellesley. In the past, a direct view of the sea from the temple was possible, supporting the principles of Feng Shui. Today, due to the constructions on the opposite side of the temple, the view of the sea is blocked. A local lore states that the ‘Jubilee’ clock tower was built by the East India Company to block the fortune of the Chinese and Cantonese merchants.  As per Feng Shui, that clock tower is an obstruction for the smooth flow of Qi at the Quan Yin Teng. Although this is against the laws of Feng Shui; the shrine of the goddess is still revered as magical and powerful. 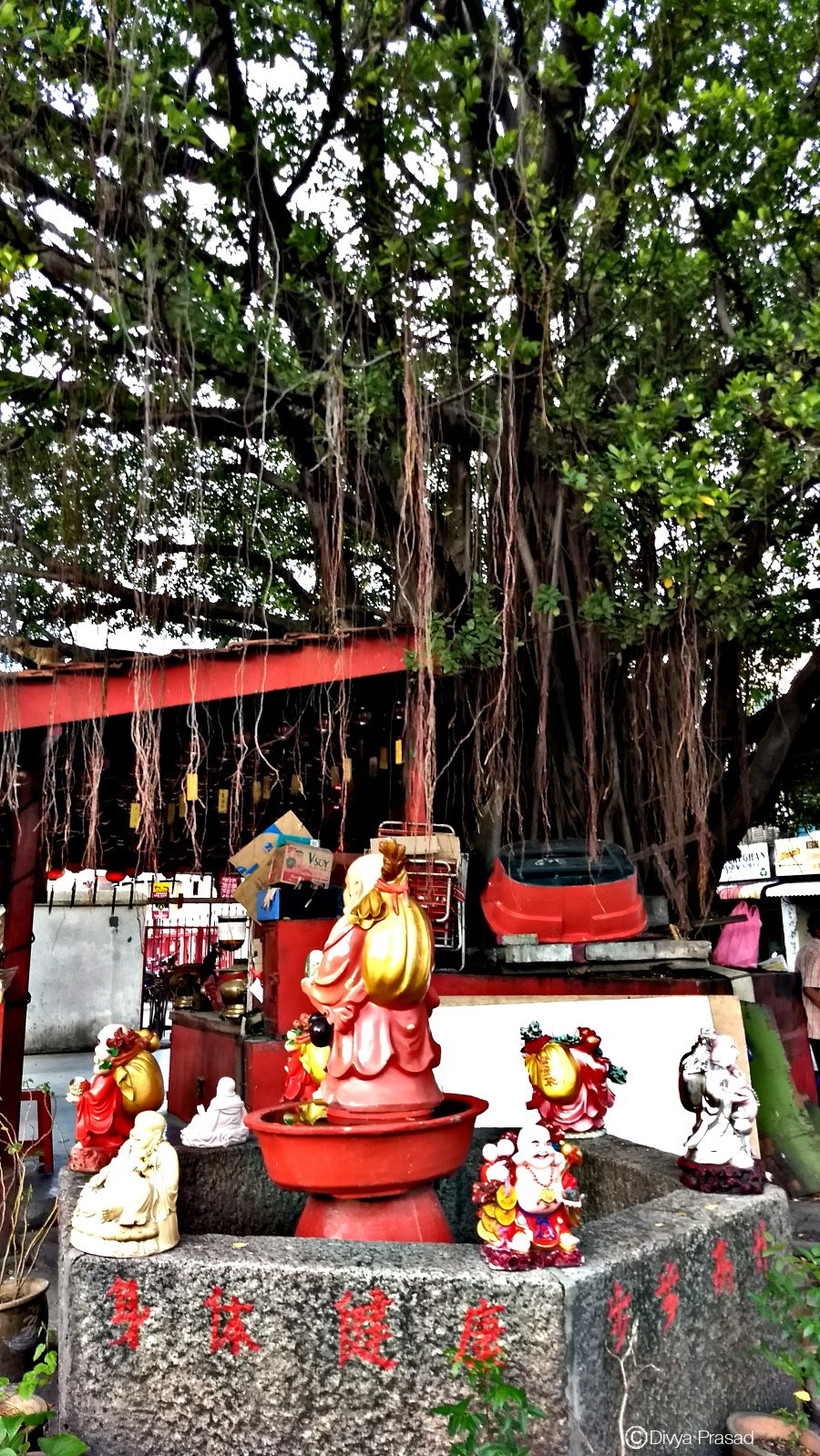 The shrine has three sacred wells, out of which only two are visible. It is believed that the waters of the wells have medicinal healing properties.  One well is outside the shrine where an old tree stands. The second one is inside the temple. The third well – one of the secret wells lies beneath the altar of the goddess which is the third eye of the dragon watching over all. As per locals, traditionally only women and prepubescent boys were allowed to enter the inner sanctum of Goddess Quan Yin and access the divination sticks. Although now they are lenient on this rule and have made it accessible to all. 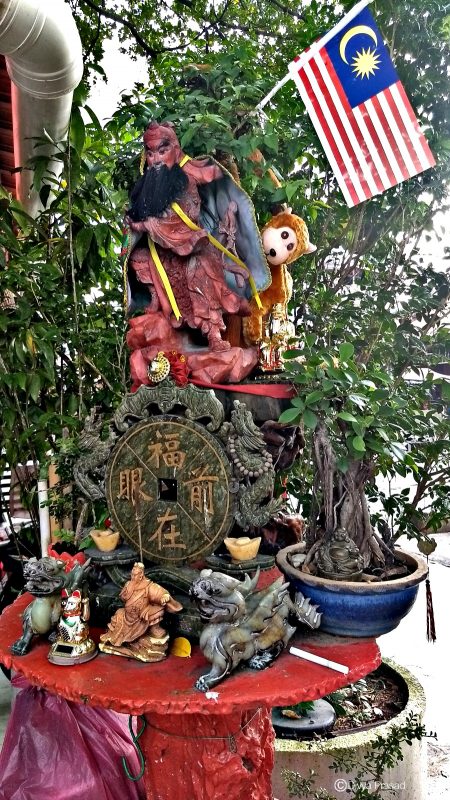 Being an Energy Healing practitioner, I have always been intrigued by metaphysics and divination practices. I was keen on learning about the Quan Yin’s book of divination. For centuries, Kuan Yin’s ‘Kau Cim’ bamboo sticks oracle has been a form of divination practiced widely across Asian countries such as China, Korea, Singapore and others. The bamboo stick oracle acts as a wisdom guide for problems and wishes. Under this, a hundred divination poems of Quan Yin guide the seeker. The poems are open to interpretation in accordance with the situation of the seeker and the wishes put forth in front of the goddess. The seeker asks from the heart, a question to Quan Yin; shaking a cylinder full of numbered bamboo sticks. Each stick represents one poem number from Quan Yin’s book of Oracles. It is popularly known as ‘Quan Yin’s book of hundred poems’ oracle across Asian countries.

The cylinder is held slightly downward and shaken. One or more sticks will drop onto the floor. But the rule is one must keep shaking and asking the same question till only one stick falls off the cylinder. As one stick falls, two triangular pieces of wood are tossed like a coin. These triangular pieces must fall inversely – one that’s open and other closed; for the stick to be confirmed as the right answer. And till this doesn’t happen, one repeats the shaking process; wishing or asking the question in their heart. Just as a single-stick falls along with the correct alignment of the triangular blocks of wood; one finds Quan Yin’s answer to the question or wishes through her poems.

I was keenly observing a Chinese local who engrossed in the divination process. Once she was done, I communicated to her in sign language that I wish to try this tool. Despite language being a barrier between us, she explained through actions how I am supposed to do it correctly. I followed her instructions to get my personal reading from Goddess Quan Yin herself.  I bowed down on my knees at the seat by the altar. I picked up one of the cylinders with sticks, praying for guidance with my eyes closed. I shook the cylinder five times; one stick made its way to the ground with the right alignment of the tossed triangular blocks, for me. My face lights up finding the right stick and answer. A friend translated the poem for me. According to her, the poem’s interpretation translates as “All the dreams in my heart shall manifest”. More so that I didn’t particularly have a question or wish to ask for. Rather I wished that let Quan Yin bring to me what I need at the moment. That was enough to feel goosebumps and happiness; just learning from Quan Yin. More power to heart’s wishes and journeys to come.

This was one of my cherished memories of Georgetown. Walking through the various Jalans – meaning street in Malay; is one of the best ways to explore George Town. Jalan Kapitalan Keling is the place to be if you are seeking a cultural indulgence. Jalan Kapitalan Keling houses this ancient Taoist Teng, a Hindu Temple of Mariamman, a Mosque – Kapitalan Keling, and a Church – St. George’s; all on the same street, which is why it came to be known as the ‘Street of Harmony’. This street is a living proof of the religious and cultural harmony amongst its people. Where love overrules everything else; blending their ways of life at the street of Harmony.

You can get to George Town’s Goddess of Mercy Temple at Harmony street by bus, taxi or walk it up if you are staying in the vicinity. You can also opt for Bicycles and tricycles for your explorations. You can find the exact location here

Penang is accessible by air, road, and rail.

By Air:  You can fly directly into Penang International Airport in Bayan Lepas from cities in Malaysia and major cities across the world. This is the best option! Buses and taxis can drop you off at any point, within the Island. Air travel saves a lot of time and is a cheaper alternative to other modes of transport.  I arrived here with Malindo Airlines. This was my first time with Malindo. I must admit that they are great on comfort, connectivity, and hospitality. They have many direct flights to Penang. The flights are very affordable for the top-notch quality of services offered on board. There’s no doubt, Malindo is going to be my preferred choice for Malaysia and other South-East Asian countries.

By Bus: Many private buses ply to Penang from other cities in Malaysia. They take roughly 5-7 hours.  For commuting within Penang, you can try the ‘RapidPenang’ buses that take you to all major points and attractions within Penang.

By Train: The national train company KTMB serves a daily route to Butterworth from Kuala Lumpur. This journey takes approximately 6-7 hours. Alternatively, there is also a train from Alor Setar in Kedah. You can check for train schedules and further information visit – KTMB. If you have a lot of time on hand, you can go rail.

By Road: If you love an adventure on wheels, you could drive or bike it up to Penang. You will need to take the North-South highway and reach Butterworth. From here on, you can either take the Penang Bridge or Ferry to Penang Island.

George Town offers a host of hotels, hostels, homestays and guest houses to suit every budget. If you wish to explore the Historical sites, then I would recommend staying in the city.  Plenty good accommodation options are available close to the major attractions in town. I had the pleasure of being hosted by Hotel Neo+. They offer Impressive suites, recreational facilities, amazing food and great hospitality. The good part is, it is located in the heart of the city so it’s easy to get around without having to spend too much on local explorations. It is closer to all the major heritage sites.  Also, their rooms come with the best views! I really had a pleasant stay here. In all, a luxurious affair that’s affordable.  I would totally recommend it!

My Tips on Trips:

I was invited by Penang Tourism and Malindo Airlines for this journey. Thank you for this amazing experience. 🙂